It’s that time of year again: the season of anticipation. After a long, hot summer, there’s something about knowing that bow season is only weeks away that brings about this excitement. It’s an itch not caused by the mosquitos, chiggers, or poison ivy that otherwise dominate the dog days of summer. Perhaps it’s because bucks across the country have pretty much grown their antlers for the year, and seeing those velvet racks in bean fields along your daily commute awakes it within you. Maybe it’s the first trail camera card pull of the season that pumps you up. For some, it could be the annual arrival of fall hunting catalogs in the mail, while for more hardcore guys it may be braving those biting insects and itchy plants to get some boots on the ground and scout a new property well in advance of hunting season. Regardless of your trigger, it’s a feeling we all understand. It’s that time of the year when we just can’t wait for deer season to finally arrive!

Anticipation season is a time of hope. Last year’s failures on our part have been twisted in our minds to have been merely bad luck. We forget that we had promised ourselves to scout harder that postseason and have more great spots chosen for the next hunting season. We forget that we had planned to knock on doors and obtain a new private spot that would make our hunting easier. We have long since forgotten that we really meant to shoot our bows all offseason and finally join that 3-D league to enhance our archery skills and confidence. All of those well-meaning thoughts we had while watching the sunset on the past deer season are no longer as important as they should have remained in our minds. Instead, we have a fresh, clean perspective on a new season of opportunity. This year will be different. This year we will overcome all that bad luck that has cost us in the past. This year we will find a big buck to chase, and dadgummit we’re going to get the job done on him! We have hope.

Unfortunately, all this positive energy can lead to a crucial mistake in the build-up to a deer season. Most of us are guilty of this in the past and based on a quick scroll of my social media accounts this very morning, there’s a lot of folks committing this blunder right this very moment. Those trail cam pics, they’re fun to share. Forum pages fill up with pictures asking viewers to age this one and score that one. Once the fun of swapping all those velvet monsters begins to wane, the reality sets in that now you’ve got to figure out a way to kill him. After all, this year can’t be like the last. So you study those pics and the ones from last year. You pore over maps of your hunting area until you could draw every topo contour and cover transition from memory. Finally, you realize that you aren’t looking at your spot in the best perspective. You need a fresh set of eyes on it with no preconceived notions of how that big buck is using your area. You know just the way to get it, too: you’ll post it online and ask those guys who kill a nice one every year what they think…

While this may sound like a smart plan, and it can be for sure, it is fraught with danger. 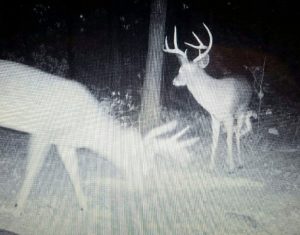 Remember that huge buck you posted a picture of last week, the one you’re thinking about while studying those maps? Well, now you just told everyone where he lives. If this is on public land like so many of us hunt, I don’t need to go into too much detail about why this could be a bad move. But what about the times you do this on private land that the landowner said you’re the only one with permission to hunt? That can’t be so bad, right? Wrong. I’ve witnessed too many times that knowledge finding its way back to someone that can, and does, affect your hunt for old Mossyhorns. The internet these days is a fantastic tool for the modern hunter, and just by knowing the general area someone lives or hunts, it is pretty straightforward in fact to locate their hunting property from a screenshot posted on facebook or a file uploaded to a forum. We all know big bucks cause us to do crazy things, but some guys take that way too far by encroaching on “your” deer in “your” territory. Don’t be the guy that misses out on a great opportunity because you made it easy for someone else to move in on him.

That’s not the only way to ruin your chance at a wall hanger, nor is it likely to be the most common. Far more often, I have guys I meet at wildlife conservation group banquets, guys at work, or a long lost acquaintance I run into at the grocery store show off their trail cam pics or tell me about where they recently saw a once-in-a-lifetime buck. Doing so does absolutely nothing to help that person take that deer, and depending on who all they tell, could have a negative impact on their chances. It’s not that the person they tell is the concern; but who all do they tell? Every time the tale gets exposed, the buck gets bigger. Inevitably, someone hears this rumor going around that actually knows where the original person hunts, and that has the ability, ethically or not, to capitalize on that information.

This is a season of hope, and anticipation is sky high. It’s an exciting time to be a deer hunter! This year, focus on those things you promised yourself you’d do better this time around, and be cautious how you share the sheds, pics, and sightings that have you so pumped to get in a tree. It’s okay to be coy about which WMA you hunt close to home (or even the next state over). Trust your hunting partners that are just as serious as you about it, but be cautious what you say to others as even nonhunters can pass on your valuable intel. When you publicly post that map, be sure to mark out identifying features that could lead to someone else benefitting from your hard work. And that bachelor group you glassed up in the corner of your property… do you really want your neighbor to know how they’re using his block of woods to get to yours? I didn’t think so.

None of this is meant to take the fun out of social media and swapping stories with other hunters you run into, or to encourage you to turn into a secretive hermit, but rather to cause you to think. What do you gain by volunteering hard-won information? What could the adverse effects be? As well-known living day legend Dan Infalt sums it up, “loose lips sink ships.” Here’s to keeping your hope afloat this deer season.